Our performance guarantee is unmatched in the industry. You achieve positive results, or there is no fee for the survey and target data.

We have access to an extensive SG II survey database from established mining areas, and can efficiently cover new, uncharted territories.

The Stargate II hardware's superior target discernment  capability, together with its proprietary  algorithms and software, effectively provides  very specific drill point vectors, allowing for a single hole test of the outlined anomaly. If the predicted mineralization is encountered, then folllow-up drilling is performed, and definition of a new mineral resource can begin. 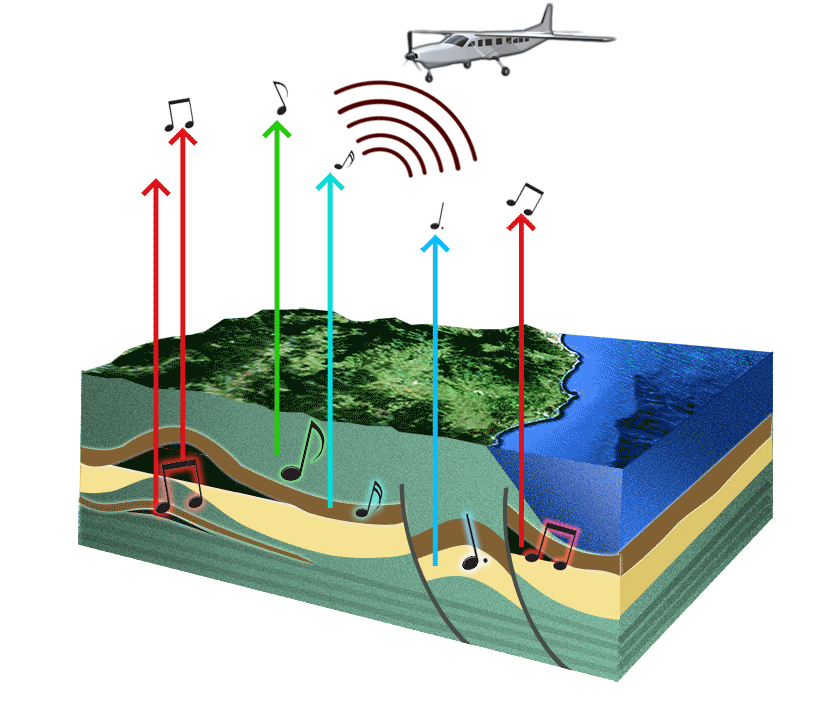 Another feature of SGII is that it is effective at identifying large, often deep structures. So ESSCO has chosen to focus its resources on targets meeting the minimum size/volume criteria of select mineral deposits. The current economics of the industry dictate that it is these very large orebodies that have the best chance of being developed, or attracting the interest of a major producer.

What is of particular interest to the industry is how SGII can accurately test a property with only 2 drill holes. These will either confirm the target and mineralization, or eliminate the property as worthy of continued exploration.

In many cases, these target holes are deep, and therefore costly. The SGII anomaly will predict the structure at depth, and  identify the relevant drill target vectors and pierce points. Too often projects are being tested with many shallow holes into random, often barren geophysical anomalies. SGII is able to filter out barren VTem anomalies. (see the Adamera example in Case Studies)

The Stargate II System has been deployed  over  the most important mineral producing areas of Canada, the USA and Mexico The data acquired from these surveys has been analysed and processed through the SGII  proprietary software and algorithms. In each key mineral producing  area, a large database of highly prospective anomalies has been identified. Some of these are herein illustrated. See Case studies or B.C.'s Golden Triangle - Stargate II Structural Interpretation of Garibaldi, Metallis Resources and Eskay Mining.

The Stargate II Surveys were deployed here and covered 90% of the area. This  data is available from ESSCO, including  analysis and drill target vectors. Contact us for details.

Please note: The SGII surveys  from 2008-2010 in B.C. identified the main sources of mineralization (structural feeders) See the maps in the link to B.C.'s Golden Triangle. Recently, renowned expert and geology textbook author Dr Lightfoot, working with Garibaldi Resources (GGI) and Metallis Resources (MTS) outlined his  interpretation of the area, and called the feeder source  'the Magma Highway'.

The discovery of  large-volume  Base Metal and Precious Metal orebodies.

The mineral exploration industry is having difficulty keeping up with the increasing demand for new deposits that can be economically mined.

The depletion of mineral reserves is a real concern to the mining industry. It is becoming more and more difficult  to replace them as  existing ore is gradually mined out. Some of the world’s top mining analysts and executives  even postulated the ‘peak gold’ hypothesis back in 2007 and 2008.

This is an offshoot of the ‘peak oil’ concept which was first presented in a paper by Hubbert in 1956.  The premise is that there is a point in time where the maximum rate of petroleum extraction is reached. He correctly predicted that America’s oil production from conventional sources in the continental U.S. would peak between 1965 and 1970. However, thanks to new technologies and extraction techniques the U.S. is now one of, if not the top oil producers in the world.

In the case of ‘peak gold’, industry experts looked at the world’s precious (and base metal) production and reserves, and determined that production had peaked, or would do so around 2015. About 10 years ago, this prediction must have sent alarm bells ringing in C-Suites around the world.  Bidding wars for mineral assets by major mining companies around the world led to many overpriced acquisitions.  Billions were spent around the world- such as   Barrick in Africa, and Kinross’ embarrassing 2010 $7 billion Fruita del Norte gold asset in Ecuador. It was recently acquired by the shrewd Lundin group for pennies on the dollar.

‘$200 Billion Flushed Away By The World’s Biggest Mining Companies’ – This striking headline from the June, 2016 Forbes magazine summarizes well the costly mistakes made during the last commodity boom. The accounting firm PwC published a report on the matter, which Forbes jestingly referred to as an ‘autopsy’. It revealed an industry-wide failure of mining company management by the top- 40 mining firms. Poor investment and capital management decisions squandered any benefits from the commodity price boom.

The damage done to the exploration industry by this acquisition frenzy and subsequent failure is immeasurable. Many companies failed or closed. Instead of exploring for assets and expanding  ore reserves, mining companies  went into debt to buy them at the top of the commodity cycle. Another consequence of this 'crash' of the mining industry is the closing of many long-established boutique brokerage firms which catered to junior exploration companies. The result is a very challenging environment for these companies to raise capital.

The ‘peak gold’ issue points to the failure of the mineral exploration industry to adequately increase reserves. In some cases, this may result in the substitution of minerals where possible, (as currently in the battery and EV industry) or a repeat of the bidding wars for scarce mineral assets.

That ‘peak gold’ is such a concern in the industry demonstrates that the expensive, slow, gradual and limited nature of current positive exploration results has proven inadequate and that a more effective tool is required in the exploration arsenal.

Stargate II (SGII) is one such tool. Where various iterations of airborne EM and other surveys identify multiple (often dozens or more) anomalies on a company’s mining claims, it is a subjective decision which one to drill, where, and to which coordinates. The method of elimination drilling approach is an ineffective and expensive tactic to test a prospective area.

If a Stargate II air survey is performed on a property and a criteria-meeting (world-class) target is identified, the SGII algorithms provide the vectors for one drill hole to initially  test the property. If the predicted mineralization is encountered, then follow up drilling is performed, and a new mineral resource is outlined.

This is a much more cost- effective approach to exploration than  the current norm. Since the economic downturn a few years ago, exploration dollars are increasingly scarce, and this new exploration tool is a logical method of supplementing a company’s current exploration program.

Because the SGII system and data is proprietary, some individuals in the industry dismiss it as ‘poor science’.

However, in modern science, ‘Occam’s Razor’, the ancient problem-solving principle is still in use today. It emphasizes that ‘simpler explanations are generally better than complex ones’. In fact, this principle has come to be referred to as the Rule of Simplicity.

Because SGII provides a simple test of its hypothesis - a single drill hole through its outlined anomaly, then this  satisfies the scientific  'rule of simplicity'. It is also very economical.

Shareholders in this industry appreciate the cost of capital, and are generally supportive of the economies of using the SGII system. If there has been resistance to using the system, often it was from competing  exploration professionals.

Exploration should be results-based. Too often, poor outcomes from  an exploration program simply results in 'doubling down', or  doing more of the same- ordering another survey or testing another anomaly. This is the ‘conservative’ and ‘acceptable’ approach to exploration. In these times of reduced exploration funding, this  is no longer sustainable.

ESSCO’s suggestion to interested companies or property owners is to use a portion of those scarce exploration dollars and put Stargate II to the test.